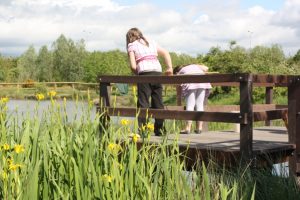 Aycliffe Nature Park is located to the east of Newton Aycliffe, where a disused railway line crosses under the A167 and is accessed either via Groat Drive or from Travellers Green.

This site is wholly owned by Great Aycliffe Town Council and is managed with the assistance of Aycliffe Nature Park Association.

The Nature Park is located in the north east corner of what was once an immense 867 acre Royal Ordnance Factory (ROF 59). It employed 17,000 people, mainly women to fill bullets and bombs with explosives during the second world war. By its closure in 1945 it had produced 700 million bullets! Following the war the factory became Aycliffe Industrial Estate.

During this time much of this site would have been covered in railway lines and loading sidings.

Aycliffe Nature Park supports an exceptional range of habitats, with a number of interesting species. This 4 hectare site is designated a County Wildlife Site due to its unimproved grassland habitats that have developed over about fifty years on the old railway siding. Other habitats consist of wetland, marshy grassland, limestone grassland and scrub.

The Nature Park has thin, poor soil that has been produced through the deposition of various materials associated with the railway. The soil is extremely compact and consequently the drainage is poor. This has lead to the development of wet and marshy conditions on the site in various locations.

Limestone grassland is located in large patches and supports the uncommon bee orchid. Other plant species include common spotted orchid, lady’s mantle, milkwort, greater burnet, kidney vetch, cowslip and birds-foot trefoil. These plants provide suitable food for a range of butterflies during the summer months including the common blue, ringlet and meadow brown.

Great Crested Newts and common frogs and toads can all be found on the site. Breeding birds include snipe and sparrow hawk.

Dense areas of willow and alder provide habitat and cover for a number of birds and mammals such as foxes and stoats.

The rare grassland habitats need to be protected from the invasive scrub; therefore scrub will be removed from the grassland area and around the peripheries during the winter months.

Litter and graffiti is removed from the site on a regular basis and contact is maintained with the local Police Officer.

The Nature Park has a surfaced footpath and is suitable for wheelchair users. The site is fitted with signage providing a brief description of the sites history, habitats and species.

Several seats are located throughout the site and a pond dipping platform is available to look for aquatic life.

If you have any comments regarding this site then please contact Great Aycliffe Town Council’s Environment Manager on (01325) 300700.