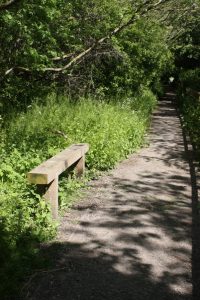 Simpasture railway line runs from the Greenfield Way- Pease Way roundabout in the west to Travellers Green at the end of Clarence Chare in the east. (At this point you also reach Aycliffe Nature Park). More information is available in this leaflet

This site is owned by Great Aycliffe Town Council apart from a slice of land that runs parallel with the houses which border the site, this is owned by Durham County Council.

Owing to its history, this site forms a linear walk with a level and smooth surface that is ideal for wheelchair and pushchair access. The site has naturally developed into mature woodland throughout most of the route.

The woodland is a mixed deciduous wood which is dominated by species such as sycamore, crack willow, ash and oak. There is also an understory of scrub species such as hawthorn, snowberry, holly and hazel.

The woodland forms an ideal habitat for many species of birds that use the cover during the summer for nesting and during the winter the trees provide an ideal winter food source.

There is a small length of open grassland that runs level with Northfield Way on the industrial estate which has been improved but with relic limestone grassland species such as wild carrot.

Trees that are dangerous are removed on an urgent basis. Occasionally standing dead wood is retained if the tree poses no threat to safety, this is to favour wildlife including many species of insects, birds such as woodpeckers and bats which regularly roost in holes and cracks in dead wood.

During the winter months trees which may provide a hazard in the future, are cut back from the main path . In addition, smaller less desirable trees are cut out to produce more light which results in the remaining trees growing with more vigour.

Where possible cut timber is stacked in locations that will not be disturbed to provide habitat piles for many species such as fungi, invertebrates, amphibians and small mammals.

Litter, fly tipping and graffiti are removed from the site on a regular basis and contact is maintained with the local Police Officers.

The main path is surfaced to a high standard as is accessible for wheelchair use. The route is also flat and even throughout.

There are a few benches located along the walkway and amble parking is located at Travellers Green.

Great Aycliffe Town Council is unable to survey the site as often as it would like, if you see something that you feel the managers of the site should be aware of, then please contact the Works and Environment Manager on (01325) 300700.