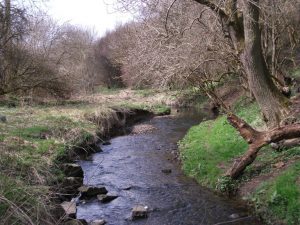 The main accessible area is found within the town. The burn flows from the south west beginning at Greenfield Way near the Horndale play facility and runs through West Park, under Stephenson Way, through a very attractive woodland section before arriving at Woodham.

Most of the burn is owned and managed by Great Aycliffe Town Council, however, there are a few fragment’s that are owned by Durham County Council around the Stephenson Way area.

Woodham Burn consists of a river valley cutting through the town. A range of habitat types can be found in this 20 hectare site. Along the banks of the Burn there is grassland, woodland and scrub, which provide shelter and homes for a host of animals and birds.

Great burnet is a tall plant with a pronounced ‘blood-clot’ flower head. Look out for the common spotted orchid in the spring with its spotted leaves and rich pink spike of flowers. These orchids occasionally produce pale pink or even white flowers that look as if they should belong to a completely different plant. Some patches of degraded grassland have been re-seeded to improve their quality. When combined with the traditional hay cutting of these areas, the grassland has developed a diverse mix of species.

Limestone grassland also provides food and shelter for a number of animals and insects, including several species of butterfly, beetle and bee and small mammals such as wood mice and bank vole.

The woodland that is scattered along the entire length of the Burn is mainly mixed, containing evergreen, native and exotic broadleaf species of tree. Perhaps the most valuable trees here are the mature ash trees with huge trunks of up to 1.5 metres in girth. These trees contain hollows, nooks and crannies, and rotten wood that provide excellent hiding places for beetles and many other insects. Other species of tree growing here include cherry, sycamore, beech, oak willow, lime and rowan. Where there are gaps in the canopy, wild plants grow in abundance.

Birds such as green woodpecker, coal, blue and great tits, robin, mistle thrush, blackbird, kestrel, tawny owl and jay can be seen along the Burn. Listen out for the laughing call of the green woodpecker. Contrary to what the name implies these birds are more likely to be seen foraging on the grasslands than in the wooded areas. Kestrels are easily recognised as they hover high in the sky scanning the ground for movement of potential prey. They are the only bird in this country to hover for such long periods of time.

The beautiful kingfisher with its shimmering blue and green plumage may be seen swooping for fish in the Burn or perching on a twig of a bankside tree. Water voles also live alongside the Burn. These adorable little mammals have become increasingly scarce in recent times although they do seem to be making a come back. None the less it is still a special treat to catch a glimpse of one splashing into the water.

Woodham Burn is an extremely important place for wildlife as a refuge in an otherwise urban area.

The site is accessible by a tarmac public footpath that extends along the banks of the Burn and is also well serviced by additional footpaths connecting to the surrounding residential estates. This footpath is suitable for wheelchair users.

The site forms a section of the ‘Great Aycliffe Way’ and has been fitted with sculptures along its length. Signage provides interpretive details of species and habitats throughout the site. Limited parking is available at the top of Humphry Close, off Silkin Way near Newton Aycliffe Town Centre.